What You Need to Know About Apple’s New M1 Chip 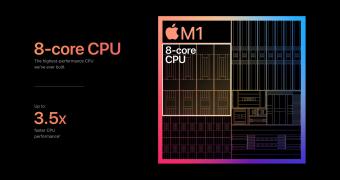 Apple has just announced its first in-house built chip that is specifically designed for the Mac and which the company claims is capable of delivering better performance than any PC processor.

Called M1, the system on a chip is built on a 5-nanometer process technology and features no more, no less than 16 billion transistors, and according to Apple, it’s capable of insane performance.

“There has never been a chip like M1, our breakthrough SoC for the Mac. It builds on more than a decade of designing industry-leading chips for iPhone, iPad, and Apple Watch, and ushers in a whole new era for the Mac,” said Johny Srouji, Apple’s senior vice president of Hardware Technologies. “When it comes to low-power silicon, M1 has the world’s fastest CPU core, the world’s fastest integrated graphics in a personal computer, and the amazing machine learning performance of the Apple Neural Engine. With its unique combination of remarkable performance, powerful features, and incredi… (read more)