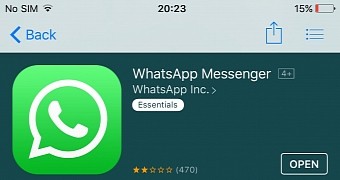 UPDATE, June 4: WhatsApp has released version 2.16.6, which is believed to fix these problems. We’re still keeping an eye on reports and will let you know if the reported issues persist.

UPDATE, June 3: WhatsApp has acknowledged the bug, and in emails sent to users, the company says that a fix is already in the works.

“We are aware of the issue and apologize for the inconvenience. Our developers have been investigating the problem. They are working on implementing a solution in the next version, which will be available as soon as possible,” the company announces.

Thanks for the tip, navap!

The latest WhatsApp update is wreaking havoc on iOS as it causes random crashes all of a sudden due to what seems to be a widespread bug impacting a big number of iPhones.

At this point, it’s not yet very clear why this is happening, but WhatsApp for iOS version 2.16.5, which … (read more)