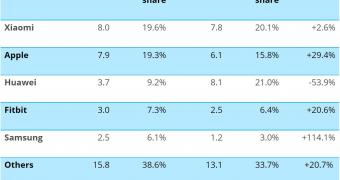 Apple has long been the number one smartwatch manufacturer in the world, as the Apple Watch just kept selling like hotcakes every single quarter.

While sales of the Apple Watch remain strong, the Cupertino-based tech giant sees increased competition from other big names on the market, and most recently, Xiaomi became the most powerful rival in the smartwatch business too.

And according to Canalys, the Chinese tech giant managed to overtake Apple in the second quarter of 2021, as it sold no less than 8 million wearable bands (these include both bands/activity trackers and smartwatches), enough to secure a market share of 19.6 percent.

Apple, on the other hand, sold 7.9 million units, this time for a market share of 19.3 percent, according to the same market research firm.