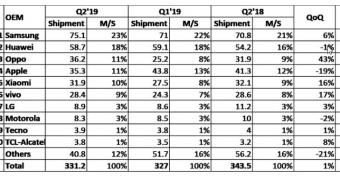 iPhone sales experienced a decline in the second quarter of 2019, according to statistics provided by IHS Markit, and analysts expect shipments to continue the drop, especially due to high prices.

Last quarter, Apple sold a total of 35.3 million iPhones, which is down 15 percent year-over-year and 19 percent quarter-over-quarter. In Q1 2019, Apple sold 43.8 million units, while in the second quarter of 2018, shipments reached 41.3 million units.

Despite the challenges raised by the United States government ban, Huawei remains the runner-up with 58.7 million units sold in the second quarter of this year. This represents a 1 percent drop from the previous quarter, but on the other hand, it’s an 8 percent increase from the 54.2 million phones that i… (read more)