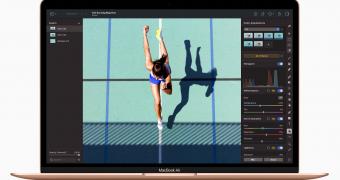 Apple has already launched an upgraded MacBook Air last year, but this refresh was only supposed to introduce Apple Silicon without any design changes.

However, according to a report from Bloomberg, a major MacBook Air redesign is expected this year, possibly with even smaller bezels and other improvements.

Needless to say, this MacBook Air will still run on Apple Silicon power, though there’s a chance the Cupertino-based tech giant would in the meantime finalize the development of an improved version of the M1 chip.

The report adds that Apple could bring back MagSafe charging, and the new MacBook Air would also come with an SD card, though right now, it looks like there’s a good chance the company gives up on the Touch Bar once and for all.

But at the end of the day, the core of the new MacBook Air would remain Apple Silicon. The company keeps bragging about the performance of its own custom ARM chip, pointing to the pe… (read more)