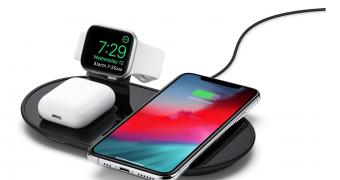 Apple officially abandoned the AirPower this year in March, but the company still hasn’t given up on the idea of allowing its customers to wirelessly charge more than one device at the same time.

So what Apple is trying to do is bring third-party multi-device wireless chargers in its stores, with the first one to hit the shelves as soon as the next week.

Mark Gurman of Bloomberg revealed on Twitter that Morphie will be the first brand to make its way to the Apple Store with wireless multi-device chargers, and at least two different models are expected to go on sale.

First of all, there’s the Morphie Dual Charging Base which allows users to charge two devices simultaneously, while a separate USB-A port makes it possible to connect a third device… (read more)