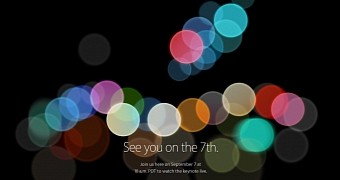 Today, September 7, 2016, Apple will hold a press conference to show the world a bunch of new devices the Cupertino company has been working on since last year’s iPhone 6s and iPhone 6s Plus unveiling.

Dubbed “See you on the 7th,” today’s event is all about Apple releasing the new versions of its operating systems, including iOS 10, macOS 10.12 Sierra, watchOS 3, and tvOS 10, as well as the unveiling of the next iPhone and Apple Watch devices, namely iPhone 7, iPhone 7 Plus, and Apple Watch 2.

We’ve already told you what to expect from today’s event, so make sure that you read that article now if you’re curious to know what Apple has in store for you, which will take place at the Bill Graham Civic Auditorium in San Francisco, at 10:00 a.m. PDT (1:00 p.m. ET or 5:00 p.m. GMT) and will be streamed live via the <a href… (read more)