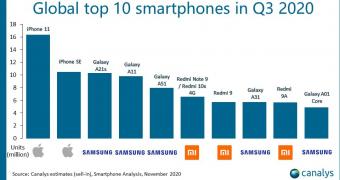 Apple may be all about the iPhone 12 right now, but this doesn’t necessarily mean the company can already forget about the previous models.

And it really shouldn’t, as the iPhone 11 is still seeing huge sales in global markets, according to data shared by Canalys for the third quarter of this year.

More specifically, iPhone 11 was the absolute leader of smartphone sales worldwide, with over 16 million sold units in Q3. As if this wasn’t enough for Apple to be the kind of the castle, the runner-up was another iPhone, this time the 2020 version of the SE.

The new iPhone SE sold over 10 million units, according to Canalys data.

Next in charts are three Samsung smartphones, but none of them is a flagship, which once again shows that in the Android world, high-end models aren’t the ones bringing home the bacon and gaining market share. The Galaxy A21s, A11, and A51 are third, fourth, and fifth in the charts, respectively.