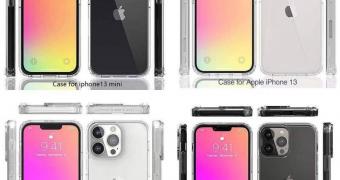 The new iPhone generation is expected in the fall with subtle changes in terms of looks, but according to people familiar with the matter, the Cupertino-based tech giant is working on something that people have been waiting for since the iPhone XS launched so many years ago.

It’s a smaller notch, because it looks like Apple is finally making it happen on the upcoming iPhone 13.

New cases renders published by Sonny Dickson on Twitter reveal the design of the upcoming iPhone 13 family and the biggest change is the smaller notch on the Pro and Pro Max models.

Furthermore, it looks like some subtle changes would be made in the camera bump department as well, though it’s pretty clear the smaller notch would be the one getting all the attention.

Surprisingly, the smaller notch might eventually make its way only to the Pro and Pro Max models, which means the iPhone 13 mini and iPhone 13 would come with the same notch … (read more)