iPhone Explodes in the Hands of an 11-Year-Old Girl 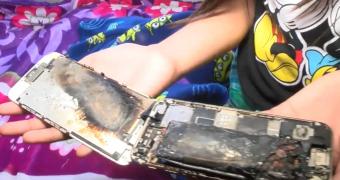 An iPhone 6 reportedly caught fire while being held in hand by an 11-year-old from California, but fortunately, nobody was injured.

Kayla Ramos says she noticed sparks coming out of the phone, so she threw it across the room. The burning device didn’t create any major damages, and Kayla’s mother, Maria Adata, says it only made several holes in a blanket.

“I was sitting down, and I had my phone in my hand and then I saw sparks flying everywhere and I just threw it on a blanket,” the girl said according to 23ABC. “I was right here on the bed and the phone managed to burn through this blanket and make these holes.”

The girl’s mother says she has already reached out to Apple, and the company launched an investigation. Apple requested the phone for further analysis and provided the girl with a new phone.