Home » iOS News » iPhone Users Not as Happy with Their Phones as Samsung Owners, Study Finds

iPhone Users Not as Happy with Their Phones as Samsung Owners, Study Finds 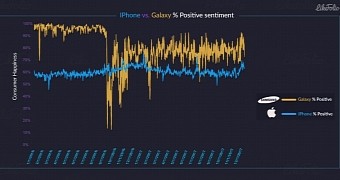 iPhone users posting on Twitter aren’t as satisfied with their phones as those who own a Samsung device, according to a new study analyzing the feedback posted on the social network since 2016.

Market research firm LikeFolio says that while the positive sentiment in the Apple ecosystem has remained pretty much the same over the last 12 months, Samsung performed substantially better, especially following the release of the Galaxy S8 and S8+ in the spring.

As you can see in the graph attached to the article, the South Korean firm experienced a major drop last year, mostly due to the Galaxy Note 7 fiasco. Samsung’s 2016 phablet was recalled by the company and eventually retired completely after it was discovered that it shipped with faulty batteries suffering from overcharging and causing increased risk of fire.