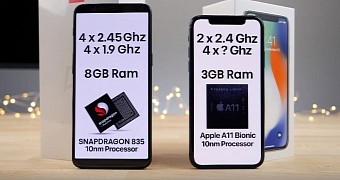 But most of the time, people compare the iPhone X with Samsung’s Galaxy S8 and, starting more recently, with the Google Pixel 2, both of which come with high-end specs and features.

On the other hand, most people forget about OnePlus, the company that has already launched the highly-praised OnePlus 5 and which came back recently with the more substantially revised OnePlus 5T. And as it turns out, it’s not at all behind the iPhone X when it comes to performance.

YouTuber EverythingApplePro has posted a video to determine the speed of the iPhone X versus the OnePlus 5T, and as few people expected, the Apple device doesn’t win in all tests. Instead, the OnePlus 5T not only that holds up very well, but it also … (read more)