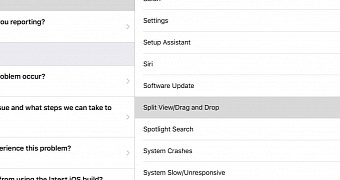 Apple is expected to preview the next iteration of iOS today at WWDC, and it looks like one of the new features to be included is drag and drop support for iPads.

@stroughtonsmith has discovered a reference to drag and drop in the Feedback app, where Apple is asking for feedback on new features that are being added in beta versions of iOS.

It turns out, however, that the company pushed the go-ahead button for this request a little bit earlier, providing us with a glimpse into this feature before the public announcement expected later today.

As far we can tell, the drag and drop support will be available on iPads running iOS 11 when the Split View mode is activated, meaning that users will be allowed to simply drag and drop files from one side to another to quickly perform a series of tasks.