Microsoft Edge Browser for Mac Gets a Dark Theme 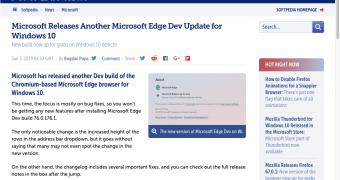 Microsoft has recently released a new update for the Mac version of its new Chromium browser, and this time the improvements are substantial for Apple users.

The Chromium-powered Microsoft Edge browser is available on the Mac in preview stage as part of Canary and Dev channels, and just like on Windows 10, Microsoft tries to roll out improvements for both of them regularly.

The most recent update for the Dev build, which brings the browser to version 76.0.176.1, introduces a dark theme for macOS computers.

At this point, however, this isn’t yet a fully-featured theme, meaning that there still are some parts of the browser that don’t follow the new mode. However, Microsoft says the dark visual style will be further refined in the coming updates, so sooner or later, the browser should feature a complete dark theme just like its Windows sibling.