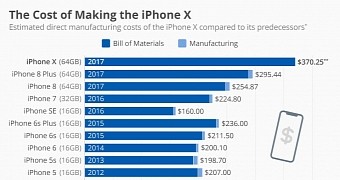 A recent in-depth analysis of the components used on the iPhone X revealed that it costs Apple approximately $370 to make the device, which means that Cupertino has a gross margin higher than in the case of the iPhone 8.

A chart put together by Statista shows how the cost of making the iPhone evolved since the debut of the iPhone 4S, revealing that building an iPhone is now nearly twice more expensive than it was 10 models ago, while the price has increased by approximately five times for the base models.

The 16GB version of the iPhone 4S had a manufacturing cost of just $196, and the estimates increased with every new release, with just a few exceptions when they actually dropp… (read more)