This iPhone X vs. Galaxy Note 8 Speed Test Is a Little Embarrassing for Apple 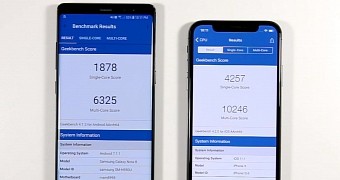 The iPhone X is currently the best of the best from Apple, and it’s supposed to deliver top-class performance that would position it as a leader of the industry.

But as compared to its rivals, including Samsung, Apple isn’t known as a company that significantly overhauls iPhone hardware from one generation to another, paying instead more attention to software optimizations that allow the device to perform certain tasks faster than previous models.

This is how the iPhone X comes with Apple’s A11 Bionic chip paired with just 3GB RAM, while Samsung’s Galaxy Note 8 is powered by either the Exynos 8895 octa-core or the Qualcomm Snapdragon 835 processor, both coupled with 6GB of RAM, double the amount on the iPhone.

But with Apple once again spending more time on the software side of the iPhone X, it was expected the two devices would offer similar performance figure, especially when it comes to day-to-day tasks.