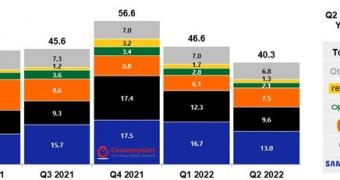 The European smartphone sales declined 11 percent in the second quarter of the year as compared to the same quarter a year ago, and Counterpoint Research explains that one of the reasons is the “deteriorating economic climate and ongoing geopolitical uncertainty.”

In terms of sales, Samsung continues to be the number one phone brand in Europe with 13 million sold phones during the quarter. This is a decline from 17.5 million sold units in the fourth quarter of 2021, and Counterpoint says one of the reasons it’s seeing a decline is Samsung’s withdrawal from Russia.

Apple is currently the runner-up in the charts with 9.6 million sold iPhones, but the Cupertino-based tech giant is also seeing a decline following its withdrawal from Russia as well.

However, Counterpoint says the most notable performance in the case of Apple comes d… (read more)