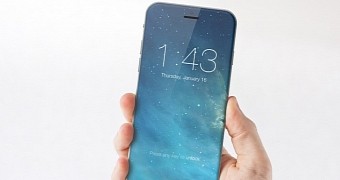 Apple is known to be working on an exciting anniversary smartphone, one that’s rumored to ditch the Touch ID and feature a dual-camera setup in the front. The iPhone 8 is expected to be announced in September, together with the iPhone 7s and iPhone 7s Plus, but its release could be delayed.

A report from Bloomberg corroborates previous rumors about the iPhone 8 and reveals that Apple is testing a prototype with a dual-camera setup in the front. The source added that the Apple is using camera components from Sony and has explored adding augmented reality-based features, as well as depth-of-field enhancements to the camera system. In addition, the iPhone 8 could come with face-recognition features.

Apple is said to have already finalized the design of the upcoming iPhone 8, which will feature a flat OLED display that will still have slight… (read more)