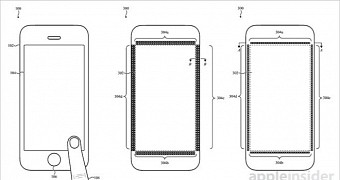 A patent application by Apple was recently published and it reveals a new method for replacing Touch ID on upcoming iPhones. The application is entitled “Acoustic imaging system architecture” and it reveals a system of acoustic transducers placed beneath the phone’s display, according to Apple Insider.

The second mode involves the transducer monitoring reflections and attenuations to the acoustic waves when they come in contact with foreign objects. The data would be… (read more)