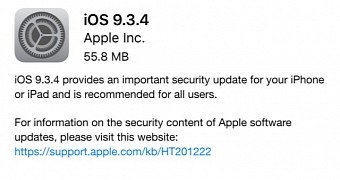 iOS 9.3.4 comes approximately two weeks after the release of the third maintenance update, iOS 9.3.3, to only fix an important security issues that was used by the Pangu Team to jailbreak iPhone, iPad, and iPod touch devices running iOS 9.2 to iOS 9.3.3.

According to Apple, the security issue was in fact a memory corruption bug, which could have allowed an application to execute arbitrary code with kernel privileges. The iOS 9.3.4 update addresses the issue by improving the memory handling.

Please update your devices immediately, if they’re not jailbroken