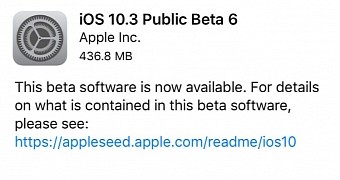 Apple released today the sixth Beta builds of the upcoming iOS 10.3 and macOS Sierra 10.12.4 operating systems to registered developers and public beta testers who want to get an early taste of the new features.

We already covered the features coming to the macOS 10.12.4 Sierra and iOS 10.3 operating systems, so you should be aware of them by now. These new Beta releases don’t add any new features and are here only to polish the final builds, which should be out in the coming weeks.

Tagged as builds 14E5273a and 16E189a, the iOS 10.3 Beta 6 and macOS 10.12.4 Sierra Beta 6 updates bring small bug fixes, but Apple mentioned nothing about them in the release notes, which have not been modified since last week’s Beta 5 /Public Beta 5 versions.