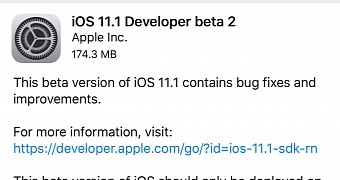 Apple has just released the second developer beta of iOS 11, this time including some pretty significant changes ahead of the public launch of the update.

As it’s the case of new beta versions released by Apple, there are no release notes available, but the company has already confirmed iOS 11.1 betas would come with a new set of emoji.

The updated pack includes hundreds of new emoji characters, including a bearded person, a zombie, and redesigned smiley faces. You can read more about the new iOS 11.1 emoticons here.

As for the other improvements that are part of this beta version, it’s believed Apple is also preparing Apple Pay Cash, a new payment sys… (read more)