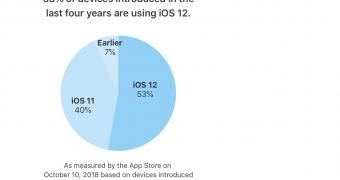 According to Apple’s App Store statistics page, the iOS 12 mobile operating system that the company released not even a month ago is now being used on more than half of the supported iPhone, iPad, and iPod touch devices available on the market. To be more precise, iOS 12 now runs on 53% of all devices introduced in the last four years.

Compared to last year’s iOS 11 release, the iOS 12 mobile operating system saw a better adoption among iPhone and iPad users, and that’s probably because of the performance improvements it brought for older devices like the iPhone 5s and iPhone 6, making them a bit faster and more responsive.

These statistics were measured by the App Store on October 10, 2018, based on the iPhone, iPad, and iPod touch devices… (read more)