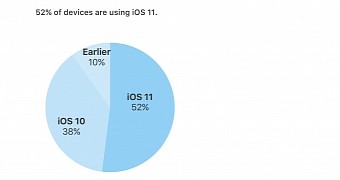 According to Apple’s latest App Store statistics that the company refreshes from time to time to reflect the real world usage of its latest iOS operating system, more than half of devices now run iOS 11.

Apple recently updated the App Store statistics page to inform app developers about the number of devices running a specific iOS version, and it looks like iOS 11 is currently installed on 53 percent of them, while 38 percent are still running the previous release, iOS 10, and 10 percent use an older version not mentioned there.