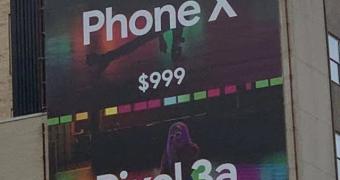 Google has started its marketing offensive for its newly-released Pixel 3a, and part of its strategy is an effort to show that this device is substantially cheaper than smartphones launched by the competition.

Ads that have started showing up around the United States take on Apple with a direct price comparison between the iPhone X and the Pixel 3a.

While Google refers to the iPhone X as “Phone X” for obvious reasons, the $999 price tag shows Google points to the base iPhone XS model as a very expensive product, costing more than twice than the $399 Pixel 3a.

The pricing difference between the two is more than obvious, albeit many believe that comparing the Pixel 3a side by side with an iPhone XS doesn’t make much sense, mostly as the standard Pixel 3 is the model that’s often considered an iPhone rival.

Google, however, is putting more and more effort into showing the world Apple is charging a premium for its products.