Home » iOS News » iPhone 14 Is Getting Emergency SOS via Satellite

iPhone 14 Is Getting Emergency SOS via Satellite 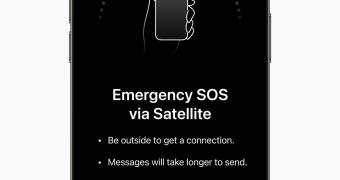 Apple has just announced that it’s bringing Emergency SOS via satellite to iPhone 14 models, though for the time being, the new feature will only be available for users in the United States and Canada.

The rollout will kick off later this month, Apple says, and will obviously be available on the latest-generation models. However, worth knowing is that the availability of this feature will be rather limited, as it’s developed in partnership with Globalstar specifically for the two aforementioned markets.

Thanks to Emergency SOS via satellite, iPhone users will be provided with access to messaging and emergency services even when no cellular or Wi-Fi coverage is available.

The new functionality is the result of a $450 million investment from Apple’s Advanced Manufacturing Fund, and just as expected, Globalstar receives the lion’s share in this funding.