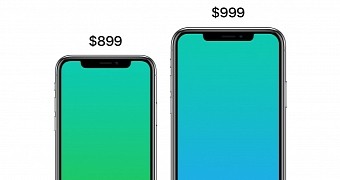 Every year, when new iPhone devices are unveiled, Apple drops the price of the older models, and the iPhone X successor(s) are expected to come with a smaller price tag than the current model on sale.

Earlier this year, there were at least a couple of reports from various analysts claiming Apple’s 2018 iPhone models will have a smaller price tag due to the fact that the iPhone X sales were sluggish since its launch in September last year, the main factor being the high price of the device.

The reports claimed Apple would unveil a cheaper iPhone model with LED display and two other OLED variants later this year, a refreshed iPhone X models and a bigger one dubbed iPhone X Plus. As expected, the LED iPhone would come with a smaller price tag.