Lenovo Leaks Some iPhone 7 Plus Specs in Press Conference 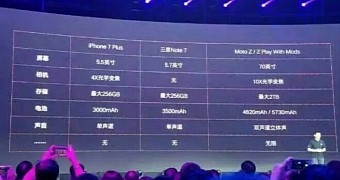 The huge number of leaks that have reached the web so far has helped us figure out what the iPhone 7 will bring new, but it’s always good to get confirmation from someone who’s more deeply involved in the industry and who’s likely to be a more reliable source.

In this case, Lenovo has become what could be the first official source confirming some iPhone 7 specs, as its Motorola unit published a graph comparing the technical specifications of flagship devices currently on the market or soon-to-be-launched with the Moto Z.

Lenovo thus compares the specs of the Moto Z with the Samsung Galaxy Note 7 and the iPhone 7, even though the latter isn’t even on the market.

But according to Lenovo, the iPhone 7 Plus won’t be as good as its own model because it’ll come with just a 5.5-inch screen, a camera offering 4X digital zoom, up to 256 GB of storage … (read more)