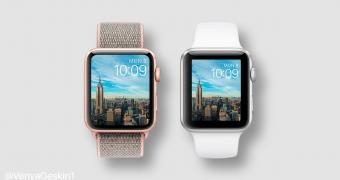 Apple’s new-generation Watch could see daylight as soon as later this year, and according to rumors that have been making the rounds lately, one of the main improvements would be an increased screen estate.

In other words, Apple wants the Apple Watch Series 4 to offer customers more space on the screen, and what better way to do this than using the method that the company already employed on the iPhone X?

This means the new Apple Watch could come with a bigger display in nearly the same body, all thanks to thinner bezels, an approach that helped Cupertino also increase the screen size on the iPhone X.

These mockups published today by Benjamin Geskin envision this bigger screen estate on the new Apple Watch, which would technically have the same dimensions as the current generation.

According to analysts, this would be the m… (read more)