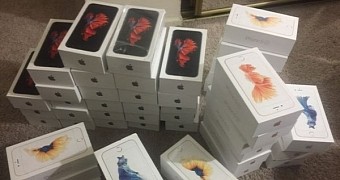 iPhones are still selling like hot cakes despite not receiving too many breaking changes in the last couple of years, and this is why they remain a top target for thieves worldwide.

A group of five Romanians knows this very well, as they set up a Hollywood style heist that involved tailgating a moving truck and jumping on to its bonnet, only to steal some iPhones that were then supposed to be sold on the black market.

Truth be told, the five Romanian men did not steal some iPhones, but no less than $590,000 worth of iPhones, so at some level, their stunt kind of paid off. Their only problem was that the police tracked them down and arrested all five, with the group now set to appear before a judge this week.

One of the thieves has reportedly climbed onto the bonnet of a modified van using an anti-slip mat before eventually jumping on the moving truck. Once he broke in, he started throwing iPhone boxes to the oth… (read more)