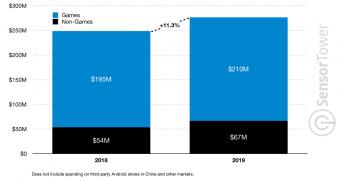 Apps published in Apple’s App Store accounted for no less than 70 percent of the spending on mobile apps on Christmas, according to new data, reaching a record $193 million.

This is a growth of no less than 16 percent year-over-year, SensorTower claims.

Android, on the other hand, recorded a growth of just 2.7 percent, as users of Google’s mobile operating system spent “only” $84 million on apps this past Christmas.

The stats show that games continue to lead the market with no less than $210 million and 76 percent share in both stores. As far as titles go, the most popular game on Christmas was PUBG Mobile. Tinder alone generated $2.1 million globally, leading mobile spending in the non-game category.

In the United States, mobile spending increased by 4.8 percent, reaching $80 million in both stores.

“As seen with global spending, games generated the majority of U.S. app revenue on Christmas a… (read more)