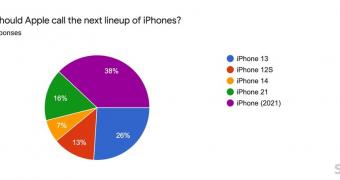 The launch of the next-generation iPhone is approaching, but buying a smartphone called iPhone 13 doesn’t seem to be everybody’s favorite thing.

The fear of number 13, or triskaidekaphobia, could have a pretty big impact on the sales of the iPhone 13, with a study conducted by SellCell revealing that no less than 1 in 5 Apple users aren’t such big fans of this upcoming model just because of the name.

When asked to pick a new name for the upcoming iPhone, just to avoid number 13, most people picked iPhone 2021, while only 26 percent said calling the device iPhone 13 makes sense. Some 16 percent of the respondents believed Apple should move to a nami… (read more)