Taiwan Flag Emoji Can Crash Some iPhones Unless Updated to iOS 11.4.1 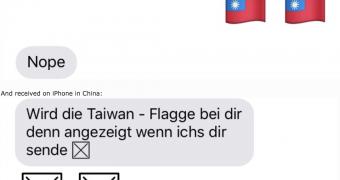 The recently-released iOS 11.4.1 software update includes fixes for a bug hitting iPhone owners in China whose devices could crash every time somebody sent them the word Taiwan or the Taiwan flag emoji.

The bug was caused by a faulty implementation of Apple’s attempt to block the use of the emoji on iPhones sold in China, as per the country’s request given the tension between the two states.

But despite iPhones supposed to show a missing symbol image, receiving the word Taiwan or the said emoji would have crashed any iOS application.

Described in detail by Patrick Wardle in an Objective-See post, the glitch was fixed with the release of Apple’s latest iOS update, technically making the censorship attempt work correctly. In other words, Apple still doesn’t allow Chinese users to send and receive the Taiwan flag emoji, but when receiving it, devices no longer crash, but instead see a missing symbol… (read more)