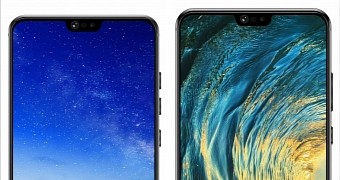 Huawei declared war to Apple a long time ago, and the company doesn’t miss any occasion to compare its devices to iPhones, always claiming Cupertino’s latest models don’t stand a chance in this battle.

But every once in a while, what Huawei does is actually use some of Apple’s ideas for features that end up being used on its own models. And the next in queue appears to be the notch.

A leaked set of press renders claim to show the upcoming P20 and P20 Plus or Pro that should launch in just a few months.

The most striking change is the addition of an iPhone X-like notch, though at first glance, it appears to be significantly smaller than Apple’s. At the same time, it also features a huge front-facing camera, possibly for powering facial recognition or any other features like animated emoji.

The standard P20 appears to come with what’s already considered an obsolete design, with a home button at the bottom of the screen… (read more)