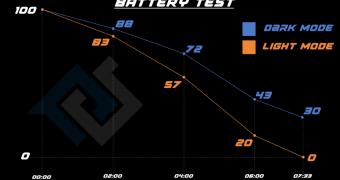 One of the highlights of iOS 13 is the system-wide dark mode, which together with similar updates for apps and websites make everything a lot easier on the eyes during the night.

But the dark mode isn’t only about reducing the eyestrain and making iOS prettier overall, but it can also improve battery life significantly.

And because Apple itself hasn’t provided any figures in this regard, it’s rather difficult to estimate the battery life boost that the dark mode generates on an iPhone versus the standard light mode.

A test conducted by YouTuber PhoneBuff, however, determined the differences between the two modes to reveal an impressive improvement in battery life overall. Using robotic arms to make the test as accurate as possible, PhoneBuff ran a series of tests, like Google Maps navigation and YouTube videos, all using an identical pattern in both light and dark modes.

And the results pretty much speak for themselves. The dark … (read more)