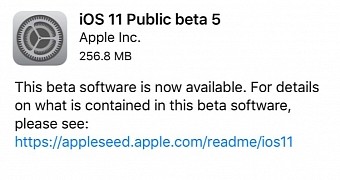 It took them only a few hours, and Apple is now rolling out the Public Beta 5 update of its upcoming iOS 11, macOS High Sierra 10.13, and tvOS 11 operating systems to public beta testers.

It’s more than obvious now that Apple is trying to wrap things up and prepare to launch the final releases of the iOS 11, macOS High Sierra 10.13, watchOS 4, and tvOS 11 operating systems to supported devices, and from what it looks it shouldn’t take them more than a few weeks.

This means that the Beta program for iOS 11, macOS 10.13 High Sierra, watchOS 4, and tvOS 11 is almost over, as Apple doesn’t release more than seven or eight Beta snapshots. Therefore, the final builds should be ready to hit the streets early September, along with the Xcode 9 IDE for application developers.

Public Beta testers are recommended to update their devices now