Apple Was the King of Smartphones in Europe Last Quarter 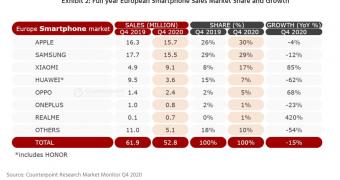 New data shared by Counterpoint Research reveals Apple was the number one phone maker in Europe in the fourth quarter of 2020 with total sales of 15.7 million units.

This allowed Apple to secure a market share of 30 percent, thus recording a decline of 4 percent compared to the same quarter a year before.

Samsung was the runner-up in the charts, Counterpoint says, as it shipped only 15.5 million units, down 12 percent year over year and enough to gain a market share of 29 percent for the quarter.

Xiaomi was third with 9.1 million sold units, while Huawei dropped to no less than 3.6 million units, a massive 62 percent decline from 9.5 million shipped phones in Q4 2020.

Counterpoint says Apple’s strategy of launching the iPhone 12 later than usual is what helped it become the king of phones in Europe in Q4.

“Apple may have declined slightly in 2020, but this doesn’t tell the full story. The decision to delay the launch of t… (read more)