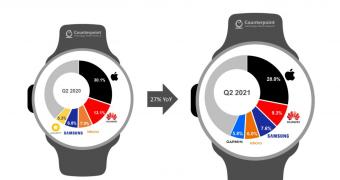 New statistics published by Counterpoint Research show that despite Apple Watch remaining the number one smartwatch out there, its market share actually declined from 30.1 percent to 28.0 percent in the second quarter of the year versus the same period a year ago.

Huawei remained the second company in the charts with a 9.3 percent share, down from 13.1 percent in 2020, while Samsung increased its share from 6.8 percent to 7.6 percent.

More notable is that Garmin entered the top five after a long time thanks to the highest shipments ever during the quarter, eventually security a share of 5.8 percent.

Counterpoint Research claims the number of users owning an Apple Watch has recently reached a new record, as the Apple device is now sitting on the wrists of no less than 100 million people…. (read more)