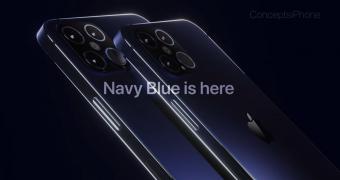 Apple is projected to take the wraps off the next-generation iPhone in the fall, and naturally, there’s a lot of excitement out there, especially as more information about the new models make the headlines every once in a while.

A video concept published by ConceptsiPhone and created by Mauro Battino uses all these details for one promo video that looks nearly as good as Apple’s, while also envisioning some of the changes that users would love to see happening on the iPhone 12.

Among them there’s the obvious 5G support, which is all but confirmed as coming to the iPhone 12, along with a smaller notch, a 120Hz Super Retina XDR display, the highly-anticipated A14 Bionic chip, as well as an improved Face ID facial recognition system.

Plus, there’s one little surprise: a Navy Blue color for the iPhone 12 Pro lineup that most people would definitely love, especially as the same version has previously been rumored to be planned for other iPhone generations as well.