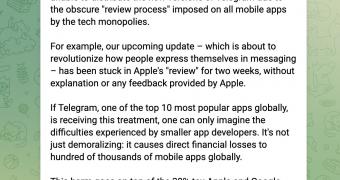 Telegram is one of the most popular alternatives to the likes of WhatsApp, and in many ways, it’s also a competitor to Apple’s very own iMessage, as it allows users to communicate in a very secure way and with lots of extras.

In the last few years, the number of users relying on Telegram for mobile messaging has grown exponentially, and this isn’t necessarily a surprise.

Not only that Telegram itself received major updates, but the controversy that affected its competitors, including the WhatsApp privacy fiasco that took place earlier this year, all convinced more and more users to give the app a try.

Now Telegram is working on what the company calls a revolutionary update, but founder Pavel Durov claims that Apple itself blocks its release. It all comes down to the review process the company uses not only for new apps but also for updates.