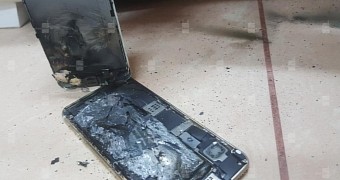 ​An iPhone 6s has allegedly caught fire after charging in an incident that reminds of Samsung’s Galaxy Note 7 that used to burst into flames when plugged in.

Before anything, it’s worth noting that this PA report only cites a “loyal reader” and the amount of information is still vague at this point, so take it with a pinch of salt. Photos that were published in the article indeed indicate that an iPhone caught fire, but we’re still awaiting a comment from Apple or more details on the incident.

According to this report, the iPhone 6s owner left his phone plugged in, but it started emitting smoke only when it was disconnected from the charger. The iPhone then caught fire and the owner obviously dropped it to the ground to avoid any possible injuries.

As you can see in these pics, the fire clearly took place in the battery area, and it is most likely the cause of the incident… (read more)